What went wrong as police in Uvalde waited to breach classroom 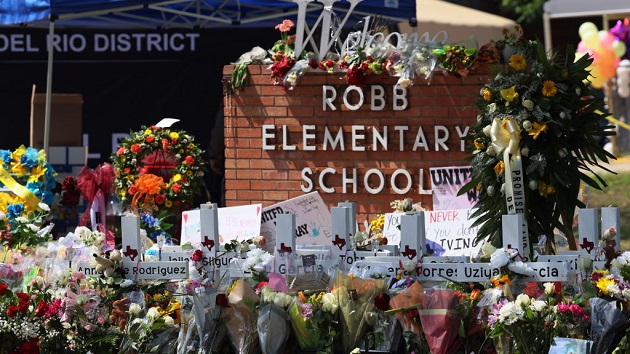 (UVALDE, Texas) — Steven McCraw, director of Texas DPS, admitted it was the “wrong decision” for officers not to go into the classroom where the suspect was for 35 minutes after a tactical unit arrived.
The head of law enforcement in Texas revealed a cascading series of police missteps in the response to one of the deadliest school shootings in the nation’s history.

A visibly shaken Col. Steven McCraw, director of the Texas Department of Public Safety, admitted that mistakes were made on the ground during an active shooter incident at Robb Elementary School on Tuesday, in which 19 children and two teachers were killed by a heavily armed gunman.

The missteps began before the shooting, when a Uvalde Consolidated Independent School District police officer responding to a 911 call of a man with a gun on the school campus drove past the suspect, who was “hunkered down” behind a car in the school parking lot, McCraw said.

The gunman fired at the school multiple times before entering through a door left propped open by a teacher at 11:33 a.m., walked into a classroom and began firing more than 100 rounds, according to McCraw.

Minutes later, several Uvalde Police Department officers entered the building and were shot at from behind the closed classroom door. By 12:03 p.m., there were as many as 19 officers in the hallway, McCraw said.

As the officers were outside the door, the incident commander — the chief of Uvalde Consolidated Independent School District Police — wrongly believed the incident had transitioned from an active shooting to a situation where the suspect had stopped firing, barricaded himself in a classroom and no longer posed a risk to children, McCraw said.

“He thought there was time to retrieve the keys and wait for a tactical team with the equipment to go ahead and breach the door and take on the subject at that point,” McCraw said. “That was the decision, that was the thought process.”

The Customs and Border Protection’s tactical team arrived on scene at 12:15 p.m. but did not breach the classroom until 35 minutes later, at 12:50 p.m., according to McCraw.

“Of course it wasn’t the right decision,” McCraw said. “It was the wrong decision.”

McCraw said there may have been a belief by the incident commander that no one was alive inside the classrooms. But he detailed 911 calls from students and teachers that made clear they were still in grave danger. It appears that information may not have been relayed to officers on the ground.

The callers were blunt. In whispered tones one said, “He shot the door,” and then, “Please send the police now,” according to McCraw.

At 12:50 p.m., officers breached the locked doors using keys that they were able to get from the janitor and shot and killed the gunman, McCraw said.

McCraw admitted Friday that the decision to wait was “wrong.”

“From the benefit of hindsight where I’m sitting now, of course, it was not the right decision…it was the wrong decision. Period,” he said. “But again, I wasn’t there, but I’m just telling you from what we know, we believe there should have been an entry at that — as soon as you can.”

“You don’t have to wait on tactical gear,” he said. “If the shooting continues, and you have any reason to believe that there’s individuals alive in there, you’ve got an obligation to move back to an active shooter posture and that means everybody, everybody at the door.”

As part of its ongoing investigation of Tuesday’s massacre, the Texas Department of Public Safety is conducting a review of law enforcement actions, ABC News has learned.

That could include anything from why the Uvalde ISD officer initially drove past the gunman to whether 911 caller information was relayed properly to officers at the scene to why the incident commander wrongly believed different protocols should apply, resulting in the 35-minute delay of the tactical team breach.