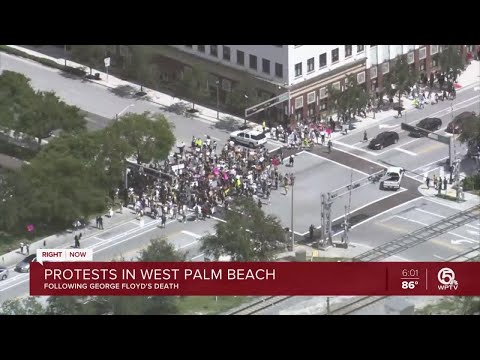 He admitted that mistakes were made when peaceful protests turned violent over the weekend in downtown West Palm Beach.

“The question was asked on me on Monday, did you use gas? I said no. Then, we got more information that says, yes, we did,” Adderley explains.

In addition, Adderley says he and his officers were not wearing gas masks on Sunday, and that they were ordered to deploy smoke into what he referred to as an unruly crowd.

He goes on to say that he later learned after speaking with local restaurant owner Rodney Mayo that was not the case.

“We later find out when we met with Rodney Mayo, he showed us the empty canister and he said people near him were gassed,” Adderley admits.

The police chief says it appears accidental, explaining that his officer grabbed the wrong can, thinking it was smoke, but it turned out to be CS gas, also known as tear gas.

“I’m asking that you accept my correction here with the info because we have some misinformation to the public,” Adderley asks the public.

Kathleen Walter, spokeswoman for the city of West Palm Beach, released this statement to WPTV:

“The police department’s reaction to disperse a crowd of individuals was entirely appropriate as our police were the subject of attack. Mayor James was absolutely right to debunk false claims that our police instigated a confrontation with protesters and that police fired rubber bullets and tear gas at protesters who had been mostly peaceful. Any information provided during Monday’s press conference by either Mayor or Chief was based on the information known to them at the time. In the interest of full transparency, new information they learned since, including a list of the non-lethal force used by officers in their defense, was shared with the media and posted on our website. You can’t get more transparent than that. To the credit of our Mayor and the West Palm Beach Police Department, it should be noted that more than 3000 individuals participated in the protest, and no one was injured.”

“We evaluate it, going to make some adjustments, and make sure it never happens again,” according to Adderley.

He adds this is the first time gas has been used in the field since he started, and explains they were justified in using it because bottles and rocks were being thrown at them.