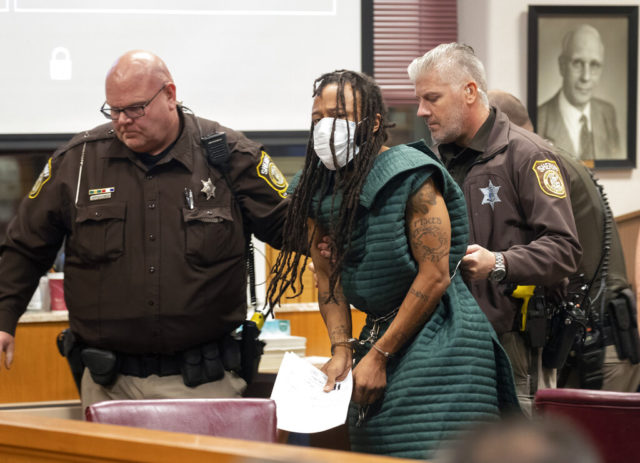 Darrell Brooks, center, is escorted out of the courtroom after making his initial appearance in a case regarding multiple people who were killed or injured when an SUV was driven into a Christmas parade, in Waukesha County Court, Tuesday, Nov. 23, 2021, in Waukesha, Wis. Prosecutors in Wisconsin have charged Brooks with intentional homicide in the deaths of at least five people. (Mark Hoffman/Milwaukee Journal-Sentinel via AP, Pool)

Donations are pouring in following a parade that turned deadly.
But, will the money be going entirely to help the families of the injured or dead even though the website says the United for Waukesha Community Fund “will support the needs of the families impacted by this tragic event?”
Organizers with the United for Waukesha Community fund said yesterday they have raised $3 million so far which is just a start.
The suspect, Daryl Brooks, who allegedly drove his SUV through a Christmas parade killing six ranging in age from 8 to 81, is being held on $5 million bond
Ironically, he was out on a $1000 bond when the atrocity was committed.
Sixteen days before the Waukesha Christmas parade, Brooks was in court in Milwaukee County, accused of running over the mother of his child in his Ford Escape.
Despite a pretrial risk assessment that said he was very high risk for committing a new crime, Cornwall set his bail at $1,000.
On Wednesday, Brooks broke his silence.
“I just feel like I’m being [made out to be a] monster — demonized” and “dehumanized,” he told Fox News Digital.
Donations have poured in from across the area and the globe, with more than 11 thousand people making a donation.
Fund managers say the $3 million in donations doesn’t include any of the matching offers they’ve received. Meanwhile, GoFundMe removed a fundraiser for Darrell Brooks Jr., who has been charged with five counts of first-degree intentional homicide after Sunday’s Christmas parade massacre in Waukesha.
The Milwaukee branch of Black Lives Matter is accused of trying to raise millions of dollars for the Waukesha mass murder suspect.
A GoFundMe was created for Brooks in an effort to raise the $5 million, the bail amount Waukesha Court Commissioner Kevin M. Costello set for Brooks.
A spokesperson for GoFundMe confirmed to FOX Business that the fundraiser was removed from the platform because it violated the GoFundMe Terms of Service.
More than $1m has been raised for the Waukesha victim’s families under an umbrella GoFundMe page, with over 29 verified accounts.
George Floyd’s GoFundMe campaign reportedly received the most donations of all time on the platform, with more than $13 million raised for his family and daughter.