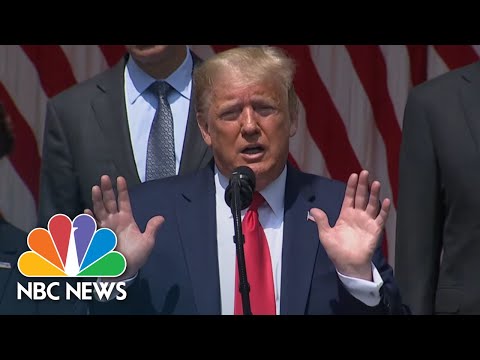 President Trump will be in South Florida on Friday to preview a counter-narcotics operation in Miami, and then to attend a high-dollar fundraiser in Hillsboro Beach.

Air Force One is due to arrive in the early afternoon in Miami-Dade County and later in Broward County.

White House officials say the commander-in-chief will visit U.S. Southern Command, where he will get a preview of an operation that is targeting drug trafficking in the Caribbean.

Afterward, the president will attend a fundraiser in Hillsboro Beach.

According to The Washington Post, which obtained an invitation to the event, the dinner costs $580,600 per couple. However, the invitation does not name who owns the home where the event is being hosted.

— NEW TRAVEL … PRESIDENT DONALD TRUMP will travel to U.S. Southern Command in Doral, Fla., on Friday to get a briefing on drug trafficking from South America.

Guests will be tested for COVID-19 before interacting with President Trump there.

The Trump campaign raised $131 million last month, and has brought in a total of nearly $300 million.

Meanwhile, the president on Tuesday said he plans to be “very flexible” when reporters asked whether increasing coronavirus cases in Florida could affect his plans for a large nominating convention next month in Jacksonville.

Republican leaders decided in June to move key parts of the Republican National Convention from Charlotte, N.C., to Jacksonville after the president expressed disappointment that Democratic North Carolina Gov. Roy Cooper was “unable to guarantee” that coronavirus social-distancing requirements would be lifted before that event, which is scheduled for Aug. 24 to Aug. 27.