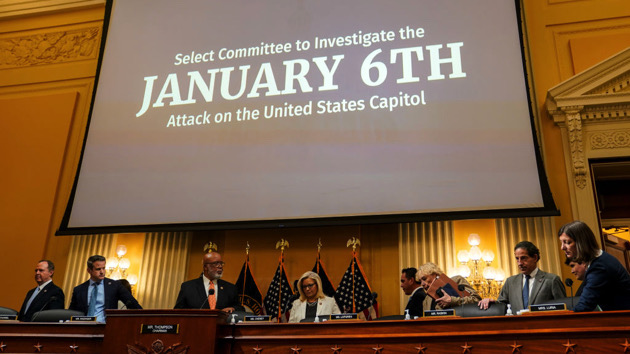 (WASHINGTON) — The House select committee investigating the Jan. 6, 2021, attack on the Capitol will convene Tuesday afternoon for a surprise public hearing, signaling apparent urgency among members to reveal further findings from their year-long inquiry.

The hearing, scheduled to begin at 1 p.m. ET, will see the committee “present recently obtained evidence and receive witness testimony,” the group said in a news release Monday.

It’s anticipated that through her testimony, Hutchinson will put a voice to many of the internal White House interactions involving the events of Jan. 6 that have been reported publicly and offer significant insight into Meadows’ actions and interactions with then-President Trump on Jan. 6 and in the days before and after, sources said.

Having already sat four separate times for closed-door depositions with the committee, Hutchinson has been featured in clips publicly displayed by the committee, including some in which she was discussing members of Congress asking the White House for pardons.

The surprise hearing comes after the committee had revised its schedule last week to postpone public events for “several weeks” as it sorted through a wave of new information.

“We have looked at the body of work that we need to get done and have taken in some additional information that’s going to require some additional work,” Committee Chair Bennie Thompson told reporters last week on the decision to go dark for several weeks. “So rather than present hearings that have not been the quality of the hearings of the past, we’ve made a decision to just move them to sometime in July.”

Rep. Mo Brooks, R-Ala., who recently lost a runoff to be the Republican nominee for an open Senate seat, told CNN last week that he was willing to testify for the committee — but only in public and about events related to Jan. 6.

Hutchinson’s agreement to testify publicly comes after months of negotiations between the committee and her counsel, sources told ABC News. Hutchinson hired attorney Jody Hunt, who served as chief of staff to then-Attorney General Jeff Sessions at the start of the Trump administration, to represent her as the latest public hearings began earlier this month.

The committee’s last hearing closed with Thompson previewing the focus of hearings to come, calling the insurrection Trump’s “backup plan of stopping the transfer of power” if he couldn’t get away with a “political coup” in the wake of the 2020 presidential election.

But Tuesday’s hearing appears to be in addition to the two remaining hearings the committee had already planned, as members continue to lay out what they’ve characterized as a “sophisticated seven-point plan” by Trump and his allies to overturn the 2020 election. (Trump has continually assailed the panel, which includes two Republicans critical of him, as illegitimate; he insists he did nothing wrong.)

As some congressional Democrats push for criminal charges to be brought against Trump and allies as the hearings unfold, Rep. Jamie Raskin, D-Md., a member of the House committee, told ABC’s This Week on Sunday that charges were not his “principal interest” compared to showing the public how the violence unfolded to avoid it being repeated.

“But I know that there’s a great public hunger for individual criminal accountability, and I’ve got confidence in the Department of Justice, in Attorney General Merrick Garland, to do the right thing in terms of making all the difficult decisions about particular cases,” Raskin added.

For his part, Garland has told reporters that he and his prosecutors are closely watching the committee’s hearings, and the Department of Justice sent a letter this month telling the committee’s chief investigator it was “critical” that members “provide us with copies of the transcripts of all its witness interviews,” which the committee so far has declined to do — with Thompson saying that will come “in due time.”

Meanwhile, the department is taking further steps in its own investigation of people in Trump’s circle. Most recently, federal agents served a search warrant for John Eastman, a former Trump attorney at the center of the committee’s investigation. Eastman contended in a new lawsuit that federal agents seized his cell phone as part of that search.

Eastman claims in his suit that the warrant was issued at “the behest of the Department of Justice’s Office of the Inspector General,” which has publicly said it is investigating any efforts by DOJ personnel to interfere in the 2020 election results.

On Wednesday, the same day the warrant was served on Eastman, federal agents conducted a search on the Virginia home of Jeffrey Clark, the former DOJ official who also allegedly sought to aid in Trump’s efforts to overturn the 2020 election. (The Center for Renewing America, where Clark is a senior fellow, said that the government was being weaponized against him.)

This Week co-anchor Martha Raddatz pressed Raskin in his Sunday appearance on what he saw as the “real impact” of the hearings in the public consciousness, citing a recent ABC News/Ipsos poll that 34% of Americans had been following the hearing somewhat or very closely — “as much as some people are very riveted,” she said.

“People are busy and so we know a lot of people, especially younger people, will learn about the hearings through snippets that go out on TV or online and people now are able to process information in different ways,” Raskin replied. “It’s not like the Watergate hearings where everybody had to be watching at the same moment because of the relatively primitive state of technology then. People are going to be able to absorb this over time.”

Tuesday’s hearing will air at 1 p.m. on ABC News and ABC News Live.