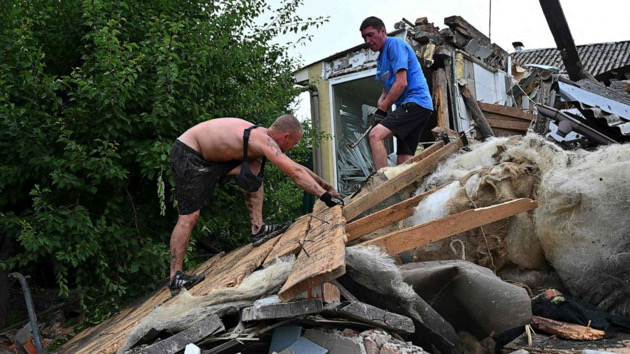 Ukraine has amassed a million-strong fighting force equipped with western weapons to recover its southern territory from Russia, Ukrainian Defense Minister Oleksii Reznikov said in an interview with The Sunday Times.

According to Reznikov, Ukrainian President Volodymyr Zelenskyy had ordered Ukraine’s military to retake occupied coastal areas which are vital to the country’s economy.

Reznikov said on Friday that “more than a million defenders protect Ukraine.” The majority of these forces — around 700,000 troops — is made up of Ukrainian soldiers, Reznikov said at an online conference.

The remaining units consist of policemen, border guards and members of the National Guard, the official added. Reznikov also said that Ukraine has turned into a certain kind of training ground where new types of weapons and innovative solutions are being used.

Ukraine has “passed the test” with its successful use of recently delivered American long-range artillery systems, Reznikov told The Wall Street Journal.

But as the war shifts primarily to an artillery battle, the defense minister added, more longer-range weapons will be needed to recapture lost Ukrainian territory.

“We need to refresh our platoons, change them and make replacements because we also have a lot of losses,” Reznikov said. “We are waiting for more armor, more weaponry from our partners.”

Russian forces are recruiting prisoners with combat experience to fight in Ukraine, a local prisoner’s rights group said on Monday.

Recruitment campaigns were run at penal colonies in several Russian cities, including St. Petersburg and Rostov, the group said. Several hundred prisoners had allegedly agreed to join Russian forces in Ukraine, the rights group said. The group said it obtained the information from relatives and prisoners who had reached out to the NGO themselves via its hotline.

The group’s report appeared to corroborate independent media investigations detailing Wagner recruiters offering high salaries and compensation to their families in case of their deaths.

A strike in Kharkiv on Sunday night hit a residential building downtown, a school and a warehouse. The emergency service said it rescued a woman from beneath the debris.

Another attack that hit the city late in the morning left at least three people dead and 31 wounded, including two children, officials said.

A missile strike also targeted Odesa on Monday morning, local officials said. Russian jets in Crimea fired four missiles at the city, with one missile striking a residential building. The number of casualties was unknown.

It is vital that Ukraine retakes territory in the south of the country before winter sets in, according to an adviser to President Volodymyr Zelenskyy.

Serhiy Leshchenko told ABC News that any military offensive would be much harder during the winter.

The Ukrainian government fears that Russia could use a deadlock during the winter to consolidate its control over newly occupied territories in the Kherson and Zhaporizhia regions, he said, and it’s therefore crucial for Ukraine to counterattack effectively during the coming months.

On Friday, the Biden Administration announced it would provide four more HIMARS to Ukraine on top of the eight that had already been delivered.

Leshchenko said Ukraine was grateful for the 12 HIMARS but that it was nowhere near enough.

“You provided good weapons, but… it’s not enough,” he said. “Twelve HIMARS is better than nothing, but it’s better that we have not 12, but 112.”

“It would change the situation on the front line dramatically and very fast,” he added.

At least six survivors have been rescued Sunday from the rubble of three apartment buildings purportedly hit by Russian missiles in the Donetsk region of eastern Ukraine, but emergency officials said at least 24 people, including a 9-year-old child, remain unaccounted for and are feared buried under the debris.

At least 15 people were killed when four Russian rockets slammed into the residential buildings Saturday evening in the town of Chasiv Yar, according to Viacheslav Boitsov, deputy chief of emergency service in the Donetsk region.

Russian officials claimed its forces struck Ukrainian army hangars storing U.S.-produced M777 howitzers, a type of artillery, near Kostyantynivka in Donetsk region, but, so far, it has not claimed responsibility for the missile strike on the residential building in Chasiv Yar.

The latest rescue came late Sunday when emergency workers rescued a man after a lengthy operation to free him from under the concrete. Video showed a rescue team carrying the man out of the ruins on a stretcher. He was whisked away to a hospital. It was not immediately clear how severely injured he was.

Emergency Services officials said the latest rescue brought to six the number of survivors dug out of the rubble.

Cranes and excavators worked alongside rescue teams into the night to clear away the ruins of one building, its walls wholly shorn off by the impact of the strike.

Jul 10, 11:41 am
15 killed in Russian missile strike on residential building in Donetsk region

Search-and-rescue workers were combing through the rubble for survivors on Sunday.

The missile strike came as Ukrainian officials reported clashes with Russian troops on the frontline in the eastern and southern Ukraine.

Donetsk Governor Pavlo Kyrylenko said the strike on the apartment building occurred Saturday evening in the town of Chasiv Yar. The regional emergency service said Sunday that the death toll had climbed to 15 and that 24 more people could still be buried under the rubble.

“We ran to the basement, there were three hits, the first somewhere in the kitchen,” a local resident, who gave her name as Ludmila, told rescuers as they removed a body wrapped in a white sheet and cleared rubble using a crane as well as their hands. “The second (strike), I do not even remember, there was lightning, we ran towards the second entrance and then straight into the basement. We sat there all night until this morning.”

Andriy Yermak, chief of staff to Ukrainian President Volodymyr Zelenskyy, said in a Telegram post that the strike was “another terrorist attack” and that Russia should be designated as a state sponsor of terrorism as a result.

Russian officials claimed its forces struck Ukrainian army hangars storing U.S.-produced M777 howitzers, a type of artillery, near Kostyantynivka in Donetsk region, but, so far, has not claimed responsibility for the missile strike on the residential building in Chasiv Yar.