Mother of Uvalde victim speaks out for first time 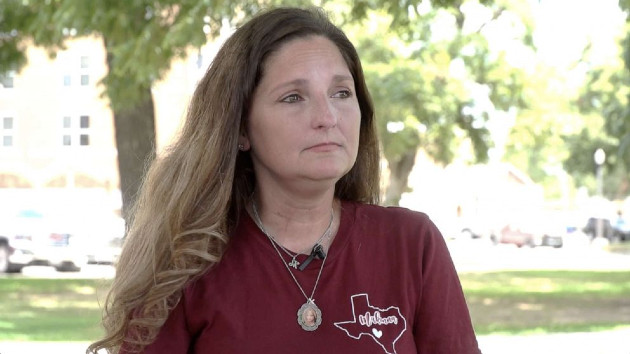 (UVALDE, Texas) — Uvalde, Texas, shooting victim Makenna Lee Elrod loved butterflies so much that they were released at her funeral in June.

Several landed on her siblings and her mother, April Elrod, who said it felt like the 10-year-old was sending them a sign.

“One landed on my shoulder, one landed on her sister’s shoe, which is silly because Makenna is three years younger than her sister but they were the same size shoe and they always fought over shoes,” said Elrod, who spoke with ABC News for her first interview since the tragedy on May 24.

“One landed on her daddy’s tie,” she added.

Elrod recently got a tattoo in Makenna’s honor, she said. Flowers grace her forearm, representing each of her children, and a butterfly sits above Makenna’s flower.

She asked Georgia woodworker Sean Peacock to make her two benches shaped like butterflies in Makenna’s honor, but she didn’t expect he’d make them for free, let alone honor all 21 victims with butterfly benches of their own using donations from GoFundMe.

Elrod has called meeting Peacock “a blessing.” He said the donation is a “love story.”

“He and I’ve been talking since and when I’m having a bad day, he just seems to be the one that messages and says you know, we’re praying for you,” Elrod said. “Her story has brought people closer together. And I mean, what more can you ask for?”

A prayer vigil was held Monday in Uvalde Town Square as the benches were unveiled. The benches were laid alongside crosses that had been put up around the square’s fountain to honor each victim, with many adorned with rosaries, teddy bears, photos and flowers.

Families of several victims joined the Elrod family at the vigil, admiring the benches as the sun went down.

Elrod said Makenna was loved by many, making friends everywhere she went. She said people continue to come up to her and tell her stories about Makenna that she hadn’t heard before.

“When she played softball, she would take an extra 30 minutes to say goodbye at the softball fields before we can leave,” Elrod said.

She was also loved by her teachers, one of whom was a close friend to the Elrods. Irma Garcia, who also died in the shooting, was shielding Makenna during the attack. Elrod herself is a teacher in Uvalde, at Dalton Elementary.

“I knew her and knew what an amazing teacher she was. And so I requested for her to be Makenna’s teacher that year, or this year, and Makenna had a wonderful year. And she was growing. And I mean, she really was having a great year and, and Miss Garcia was an amazing teacher. Amazing,” Elrod said. “And I know that she, that when she left this Earth, that she was being held by Miss Garcia, and she was trying to protect her.”

When people remember Makenna, Elrod wants them to remember her daughter’s bright smile and welcoming demeanor, as well as her faith.

They hope her spirit lives on through a butterfly garden near their home, as well as the memorials of her scattered throughout the city.