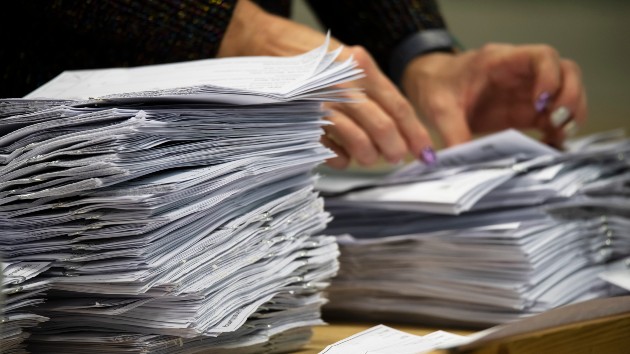 (ATLANTA) — County election officials in Georgia must begin the time-consuming, labor intensive process of auditing — by hand — every one of the nearly five million ballots cast in the presidential contest by 9 a.m. Friday, and the state has pledged to make the process as transparent as possible.

“One of the most important parts of this process is that it’s to be open and that people are to be able to see this,” Chris Harvey, the director of elections in Secretary of State Brad Raffensperger’s office, said Thursday. “To our county election directors and their staffs, the — the eyes of the of the state and nation are on you guys and on you performing this — this really important task.”

Counties must finish their audits by midnight Wednesday, and it’s likely many election workers will have to work through the weekend to complete it in time. Under state law, Raffensperger must certify the election by 5 p.m. on Nov. 20, and officials in his administration said they believe they will meet that deadline.

Updated results will not be released while the audit is ongoing, but the secretary’s office will report what percent of ballots counties have completed auditing.

What’s happening in Georgia is not a recount under state law, but rather a “risk-limiting audit.” The state was always planning to conduct an audit on one contest following the general election — it just wasn’t always planning for the audit to involve every single ballot. According to the State Election Board’s rules, the secretary has total discretion in selecting which race to audit, and he and his team have maintained that they chose this race strictly because of the national attention it has and the slim margin.

“If we had chosen to do what would have been an easier risk limiting audit … it would have probably undermined confidence in the outcome of the presidential election,” Gabriel Sterling, the statewide voting systems implementation manager in Raffensperger’s office, said in a press conference Thursday. “And let me be perfectly clear on this, if it was 14,000 votes the other way, we would be doing the exact same thing.”

Sterling disputed that the secretary was “caving” to the Trump campaign, which on Tuesday requested a hand recount happen before results are certified and also asserted that if the results were flipped, and it was President Donald Trump who was leading over President-elect Joe Biden by some-14,000 votes, there would be similar cries over the election’s integrity from the left.

And legally, a candidate can still request a recount, which would be done using high-capacity scanners, after the election results are certified if the margin is still within 0.5% of all votes cast.

“I would hope that common sense would prevail, and if (the audit is) very close to the first time, that possibility of the computer recount being — changing the results would be slim to none,” Sterling said.

So far, neither Republicans nor the Trump campaign have produced evidence of widespread election irregularities, while maintaining there have been.

“We have ongoing investigations, but we’ve not seen something widespread of a large nature, nothing in the order of over 10,000 (votes),” Raffensperger said on CNN Wednesday.

Raffensperger’s office is confident that the audit will show that the results were tabulated correctly, but they’ve also admitted that the audit is not the way to find illegal voting, as workers cannot see who the ballots belong to.

“This is an audit of the ballots that came through legally,” Sterling said Thursday. “It’s going to have to be a post-election situation to look for individuals who may have violated the law and … double voted, and if anybody has cast a ballot for a dead person. That’s a violation of the law.”

Rep. Doug Collins, who’s been tapped by the Trump campaign to lead its recount efforts in Georgia, called Raffensperger’s move Wednesday “a victory for transparency,” but on Thursday evening, he completely reversed his position, saying that the rules and regulations outlined Thursday, “do not satisfy our concerns that gave rise to our request for a hand count in the first place.”

The audit is not being done at the Trump campaign’s request and it is being conducted in accordance with state law.

Audits are scientific and the margin of the contest matters when determining how many ballots need to be looked at as part of the audit. The closer the margin, the more ballots that need to be examined.

“In Georgia’s case this year, the required sample size is so large — more than 1.5 (million) ballots — that it is less work to sample every cast ballot, simply because attempting to audit a large subset incurs the work of retrieving and replacing specific ballots, while reviewing all ballots does not,” Ben Adida, the executive director of VotingWorks, explained in a statement Wednesday.

VotingWorks is a nonpartisan, nonprofit organization that has been working with Raffensperger’s office for the past year to implement its risk-limiting audit, which is now required under law following the passage of an election reform bill in 2019. On Thursday, officials from the secretary of state’s office and the state’s 159 counties met over Zoom with members of VotingWorks’s team to get an overview of how the audit will work now that every ballot will be looked at.

The process will not happen in secret

Counties are supposed to advise the days and times they will be doing the audit by posting it on their website, their social media and their physical office. Members of the public are allowed to observe from designated viewing areas within the location the audit is taking place in the counties. Press and members of the public are allowed to take photos and videos and the counties are being encouraged to livestream the process, as some of them did while the ballots were first being counted.

There will also be “monitors” overseeing the process. These are people who have been formally designated by either the state or county political parties to observe this process.

This role is similar to that of “poll watchers,” and like poll watchers, “monitors” must abide by a strict set of rules:

While the task at hand — and timeline accompanying it — seem daunting, Harvey, the state elections director, said that what workers have to do isn’t exceptionally difficult. During the training Thursday, VotingWorks played a video of children acting as the audit board.

There will be a check-in/out station where batches of ballots that are not currently being looked at by the audit boards will be kept. Workers at this station — and there should be at least two — are responsible for monitoring ballot containers and bringing containers to and from the audit board tables; for recording which ballot batches are going to which audit boards, at what times they leave this station and return to this station; and for entering the vote totals into Arlo, the name of the system being used to store all data, after an audit board completes a batch of ballots.

The first ballot batches that should be given to audit boards are the absentee ballots because these are hand-marked ballots. The audit boards will have to read the filled in oval for these ballots. All ballots produced via the state’s ballot marking device touchscreen voting machine, will have the voter’s candidate of choice’s name clearly printed on the ballot. These make up 75% of all ballots, and will be easier to count.

In Thursday’s press conference, Sterling stressed — as he has several times since the election — that while only a quarter of all the ballots will require more tedious examination, “human beings are the most flawed part of” the election process.

“I guarantee you the numbers will be slightly different,” he said. “They’re going to make more mistakes than computers, but there are people out there that just fundamentally will not believe the outcome unless — they say, ‘I don’t trust this computer, so I need a human being to have looked at that to make sure that it was right.'”

The teams of two are working together at a table that must be completely clear of everything but designated materials, so no food and drink is allowed. On the table, there will be marked places to put ballots that are for Trump, for Biden, for Libertarian Jo Jorgenson, for overvoted ballots and for blank/undervoted ballots. There will also be folders for duplicated ballots, write-ins and undecided ballots, which are the ballots with unclear markings.

Both people working the audit board look at each individual ballot and they are supposed to “deliberately” pick up and count the ballots, not flip through them with their fingers. This helps ensure accuracy and that they don’t inadvertently miss a ballot.

Once the board is done going through their batch of ballots and putting them in their respective spaces, the audit board members will fill out a sheet with the totals for each candidate or category of ballot, seal the ballots that are not in the envelopes — which are brought to a different table — put back in their container and then sign their sheet.

The audit board will raise a sign with a check mark on it to signal they are done. A check-in/out worker will come and get the container and bring it back to their station, ensuring it’s properly sealed and record the time. Then, the worker will deliver a new batch of ballots to the audit board.

“The goal is to keep the audit board moving,” said Monica Childers, VotingWorks’s product manager for risk-limiting audits.

If audit boards have questions during this process, they have another sign with a question mark they can raise that will signal to the superintendent — the designated election worker overseeing the entire process — to come over and help them.

The use of signs is meant to help keep the room quiet for the auditors.

If the audit board members need a lunch or bathroom break, they should not go until after they finish their batch of ballots. Breaks are, of course, expected and allowed.

Along with bringing the ballots back to the check in/out station, the check-in/out worker will also deliver the ballots in the envelopes — the write-in, duplicated and undecided ballots — to the vote review panel, which is made up of members of both political parties.

For undetermined ballots — the ones where the voters’ preference is unclear — the bipartisan vote review panel will look at them and make a final determination of the voter’s intent. The superintendent is the tie-breaker if needed.

When the vote review panel is done with these ballots, they are sealed in envelopes again and a check-in/out worker retrieves them, returns them to their original ballot batch container and logs their receipt.

The actual data entry is done by the check-in/out workers, but the superintendent is the only person who has log-in credentials for the system.

As ballot batch tally sheets are returned, the workers choose “new batch” in the system, enter the information on the sheets — the vote count — and then click “save results.”

Only after the entire audit is completed for the county will a worker hit “finalize results” — and they will receive a warning that they cannot make changes if they accidentally click this.