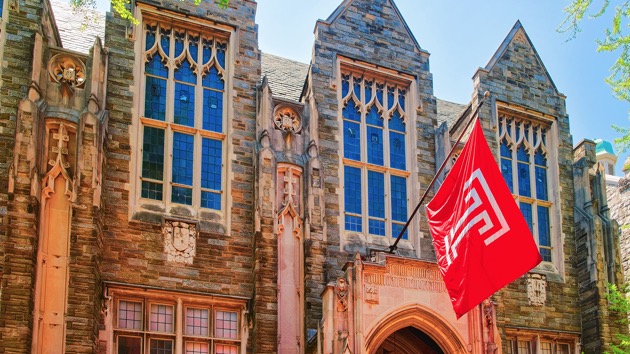 (PHILADELPHIA) — Liam Spady had already come a long way by the time the COVID-19 pandemic hit this spring when the sudden lockdown put his future once again into the throes of uncertainty.

The 22-year-old homeless college student had been taking courses at a community college in Philadelphia. When the college closed its campus due to the pandemic, he lost his study space, his cafeteria, his access to Wi-Fi and plentiful power outlets. Like many homeless people, he said he relied on these public spaces to survive.

Spady received an acceptance letter to Temple University, offering him a scholarship for this fall, but said he wasn’t sure he’d be able to go if the COVID-19 shutdown was going to keep the campus closed.

But then an opportunity for housing opened up for Spady, finally giving him a place to study and a power source, which allowed him to accept Temple’s offer.

Now, he has not only finished his first semester at Temple University, but he is living on his own in an apartment in west Philadelphia, too.

“I got a lot of great emails, texts and even a couple of phone calls for completing the first semester at Temple and just finally being independent,” Spady told ABC News’ daily news podcast, “Start Here.”

Spady took five classes at Temple this semester. He said the school implemented a hybrid of both in-person and remote classes.

“Most of my classes focused on the work that I do: youth culture, youth education,” said Spady. “But it was still fun because the professors adapted their lessons to be able to teach online.”

He added that he did make one classic mistake navigating campus the first day of in-person class.

“I realized that I was an hour-and-a-half early because I was so hyped to get to school. So I attended the wrong class, but it was fun,” he said.

Spady said he became housing insecure as a high school student, shuttling between the homes of friends and family.

This summer, he connected with the Philadelphia Office of Homeless Services to find an apartment in west Philadelphia before the start of school.

“It kind of feels good … Relief [after] constantly wondering what the next situation would be,” he said.

Spady said he feels grateful that his situation at Temple University panned out, but others may not be as lucky.

The Center on Budget and Policy Priorities, a progressive think tank, reported last week that tens of millions of people across the country are out of work and struggling to afford adequate food or pay their rent.

Spady, who has worked with different homeless and shelter organizations, said that the broader homelessness support system is overwhelmed.

“A lot of the funding streams that people thought they were going to get have not come down from the federal government due to different budget cuts,” he said. “Some of the other challenges … like employment and food security, those projects have kind of been put to the side to make sure people are in shelters or other residences.”

But for now, Spady said he is excited for the opportunity to learn.

“I have two years left on this public health degree bachelors,” he said. “I want to be a dietitian for the community and work in the field of nutrition. So in three years you’ll see me in the field.”