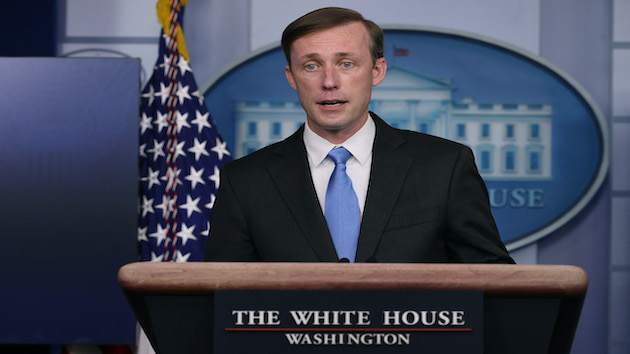 (WASHINGTON) — As India continues to grapple with a new surge of coronavirus cases, White House national security adviser Jake Sullivan said on ABC’s “This Week” Sunday that despite bipartisan criticism of their response, the Biden administration is “proud” of their aid efforts so far.

“In a crisis of this speed and ferocity, we always wish we could move faster and do more,” Sullivan told “This Week” co-anchor Martha Raddatz.

“We’re proud of what we’ve done so far which has included multiple plane loads — and we’re talking very large military plane loads of supplies — including oxygen, including diverting raw materials for vaccines, including therapeutics that can help save lives, and we are continuing to work to source additional critical materials to move them as fast as we can,” Sullivan said.

Sullivan added that the U.S. was concerned about the variants and spread of the virus, as well as “all of the secondary effects that emerge as this pandemic rages out of control in India.”

Sullivan said the administration is hopeful there would be movement on the issues in the near future.

“We believe that the pharmaceutical companies should be supplying at scale and add cost to the entire world so that there is no barrier to everyone getting vaccinated. Our ambassador, Katherine Tai, our U.S. trade representative, is engaged in intensive consultations at the WTO, to work through this issue, and we should have a way forward in the coming days,” Sullivan said.

Sullivan on “This Week” also discussed ongoing negotiations with Iran to re-engage in the 2015 Iran nuclear deal. Despite Iran’s deputy foreign minister reportedly saying an agreement had been met to lift economic sanctions to bring the parties closer to an agreement, Sullivan said that wasn’t the case.

“We have not yet reached agreement in Vienna,” Sullivan told Raddatz.

“There is still fair distance to travel to close the remaining gaps, and those gaps are over what sanctions the United States and other countries will roll back,” he continued. “They are over what nuclear restrictions Iran will accept on its program to ensure that they can never get a nuclear weapon. And our diplomats will keep working at that over the coming weeks to try to arrive at a mutual return to the JCPOA, which is the Iran nuclear deal, on a compliance-for-compliance basis.”

The White House recently announced their months-long review of North Korean policy has been completed, and while the objective continues to be a completely denuclearized Korean Peninsula, Biden will not “rely on strategic patience,” a term that defined the Obama-era approach.

While the Biden administration hasn’t provided full details, on Sunday Raddatz pressed Sullivan on how the new approach would bring a different outcome, given that the four previous administrations failed to achieve denuclearization.

“Our policy towards North Korea is not aimed at hostility, it’s aimed at solutions. It’s aimed at ultimately achieving the complete de-nuclearization of the Korean Peninsula,” Sullivan said.

“We believe that rather than all-for-all or nothing-for-nothing, a more calibrated, practical, measured approach stands the best chance of actually moving the ball down the field towards reducing the challenge posed by … North Korea’s nuclear program,” he said.